People often ask me “How did you do that?” and “How long did it take?” I can’t answer the second question, because I don’t keep track of the hours. It takes as long as it takes. But these pictures might give you a glimpse into the work that lies behind some of my pieces.

“Song of Justice” was a major work, since it involved initial consultation with Staff of the Lake Junaluska Conference and Retreat Center, who asked me to do the artwork for their new Bethea Welcome Center. The centerpiece of this work is the large installation “Song of Justice,” which sought to embody the ethnic diversity of people who come to the Conference Center. I settled on a composition which would utilize fabrics wound around old organ pipes. My husband Bill and I roamed around western North Carolina picking them up from organ repairers and chapels. The first step was to clean them up, as you see me doing here. Then I painted them with a variety of metallic paints. Otherwise, I left them in the condition I found them in.

The second step was to assemble the many pieces of fabric which I had received from people. Some were from missionaries who had lived in far-flung reaches of the globe. Some kinte cloth was from a faculty member at Candler School of Theology, who had received them from a student who was later made King of his tribal region in Ghana.

The entire work uses fabrics and motifs representing the four dominant ethnic traditions of our own area—Scotch-Irish, Cherokee, Hispanic, and African-American. The three central pipes feature African-American, Native American, and Latino traditions. The beads on the Cherokee pipe were from an elaborate dancing belt that I found in a shop in Cherokee NC.

Since I was working on a large scale, I had to constantly imagine the relationships among the pipes as I selected and placed the various fabrics.

When they were finished I had to get a local metal worker to make fasteners to affix them to the walls, which the contractor had made especially strong, since the architect thought that the pipes would be very heavy. In fact, most of them were made of zinc and were relatively light for their size. A few of the smaller ones were made of lead and were from the old Chapel at Duke University.

Finally, facing a deadline, we had to get them up on the walls. Two of the workers. named Mike and Pike, helped me, but I had to get up on the lift to make sure they put them in the exact right places to create the final effect. While the pictures on this site give you a sense of the overall impact, it is, once again, one of those things that you have to see in person.

Chapel of the Angels (Mopan River)

This commission arose from a visit we made to the Mopan River Resort in Belize in the winter of 2003. In the course of our visit Pamela Picon, who owned the resort with her husband, became interested in my work and specifically in whether I could make some mosaics for the wedding chapel they had built. They had named it the Chapel of the Angels, but there were no angels in it.

In the course of surveying the chapel and making pictures I slipped and fell on some wet grass and fractured my right wrist, but plans for the mosaics took shape during my healing (while I did some painting with my left hand).

The four angels are mounted on plywood panels. Not your traditional angels, these angels represent the Angel of Mopan River, the Angel of Tropical Flowers, the Angel of the Wings of Paradise, and the Angel of Maya Mountain. These photos give you a sense of how I first sketch the design onto the white panels, with notes about colors and size of tile. I put down the outlines of the main figures first and then fill in with the subordinate motifs.

To affix the tiles, I lay down a small amount of tile glue (Gemtek) and push the tiles firmly down in place. When all the tiles are in place I smear a grout of an appropriate color all over the tiles, pressing the grout into all the cracks, trying not to leave any bubbles that would become holes. To remove the excess grout, I later rub the surface with vinegar in a soaked rag until all the excess grout is removed.

While the tiles are pristine and hard, working with these glues, grout, and solvents, as well as tile and glass chips, can get messy, as you can see in this picture of me working on another mosaic. Gloves, apron, and table covers are all part of the process.

When I was finished, Bill built some sturdy wooden boxes to ship them to Houston for trans-shipment to Belize. I hope their vibrant colors were appreciated by guests and wedding couples. Upon the death of her husband, Pamela sold the resort and took the mosaics to her new home in Guatemala.

After the Storm (The Katrina Cross)

“After the Storm,” which we just call The Katrina Cross, began with fragments left on the beach and land after Hurricane Katrina swept through in 2005. In this case I was not working with manufactured tiles but pieces of broken glass, pottery, and even some Christmas tree bulbs. Moreover, this would be a two-sided mosaic. We started with a piece of plywood, cut to the shape I wanted and painted it white.

I wanted the overall message of the cross to be one of rebirth after the destruction of the storm. I tried to make this happen through the choice and placement of the pieces, using the same techniques that I described above. Then I drilled some holes at the ends of the cross’s horizontal member so that small green twigs could be placed there to emphasize this theme of rebirth and new growth.

I had to make sure that the pieces at the bottom were set in such a way that we could put it on a stand made for the cross. I had anticipated that it would be placed permanently in a new chapel at the Gulfside Retreat Center, but so far it has travelled widely to various Methodist conferences and meetings, including two General Conferences.

Tapestry weaving, unlike floor loom weaving, makes use of a vertical loom. Rather than weaving full lines back and forth, weaving is done more in a patchwork fashion. It is traditionally done with the design on its side, and historically it is woven from the back. I sometimes weave with the design on the side, which increases the structural integrity, but I never weave from the back. The piece on the loom is “Spring” from the Seasonal Quartet series, shown as I wove it on its side.

I place a cartoon of the design behind the loom and the weaving is done as a direct copy of the cartoon design. The cartoon may contain only the outlines, the colors, and other textures being improvised, or the entire scheme may be represented on the cartoon.

For the larger pieces Bill built me a loom of two-by-fours with several hundred nails on which the warp was strung. These pieces were generally hand picked, which means each string was picked up with my finger. Occasionally I rigged a more efficient system of opening the warp.

For medium to smaller pieces I used an upright Mirex metal loom on my worktable, using a foot pedal to open the warp.

Traditionally, the ends of yarn are left hanging in the back, but I prefer to weave them in with a needle after the piece is completed.

Silk painting always begins with pure white or dyed silk. It is traditionally suspended to be painted. “Dams” are created by the use of some agent to stop the spread of the dye or, if more of a watercolor effect is desired, such barriers are not created. After the silk dye is applied the piece must be steamed to set the dye and make the design and colors permanent.

“Spirit Over the Waters” is a set of liturgical pieces created for the Fellowship of United Methodists in Music and the Worship Arts (FUMMWA) at Lake Junaluska in 2009. It included two large banners, paraments, and a table cover. In the first picture the two banners are in their pristine white condition, strung up between sawhorses stabilized with chunks of firewood and the pickup truck. This was to accommodate their extra-long size. My vision for these pieces was quite different than how they turned out. I foresaw them as being very “washy,” like a large watercolor. Instead, due to the direct sunlight and wind, the dye dried immediately upon contact with the fabric. So, while the piece is called “Spirit Over the Water,” the Spirit over the driveway was hard at work! It is best not to argue with Mother Nature.

After taking the banners off the sawhorses, I repeatedly steamed them with a steam iron, which is not entirely satisfactory but was necessitated by their large size.

The “Ordinary Time” banners shown on my worktable in my studio were created from silk brought back from Japan in 1945 by the father of a friend of mine. The silk had resided in a drawer for all these years but was in perfect condition. My friend’s father, then in his mid nineties, was able to attend the dedication of these pieces at First Methodist Church, Waynesville.

The design reflects our forested environment and each piece uses the same outlines but is painted somewhat differently. Each has a unique design as a focal point on the upper third of the hanging. The large brush I am using is a Japanese brush that I bought to use as my “sword” in Tai-Chi. It works well enough to paint with.

Papercuts, sometimes called paper lace, are what I call “my big, fast, and cheap medium.” I learned this technique from Nancy Chinn, who is a master of this technique. It involves cutting holes in paper so that light passes through, creating a design. They can be created from colored paper, but more often white paper, which can be painted or left unpainted. I use 90 lb drawing vellum, which has enough weight to hang well and hold up reasonably well for repeated uses.

I draw outlines of the major design components on the paper and improvise freehand the patterns which fill the design. Each small hole is individually cut with an Exacto knife. Small bridges of paper must be left connecting the larger negative spaces for structural integrity. This seemingly tedious process goes rather quickly and lends great individuality to each part of the design.

If I decide to paint them, I have to find a large surface and protect it with plastic sheeting. I then spray it with selected colors, as I am doing with one of the pieces commissioned for a church in Grapevine, Texas. As you can see, for these I used a section of our home’s exterior wall.

One of the things I like about this medium is that it can be read from both sides. In all my work for the local church I attempt to create pieces that are the same but in reverse from both sides, so that the choir and others on the chancel platform have a view of something beautiful rather than the backside of something.

I also like that they are relatively temporary. With care, they can last a considerable time and be used repeatedly, but they do not represent a huge investment, and fresh and new pieces can be created as needed for various occasions. 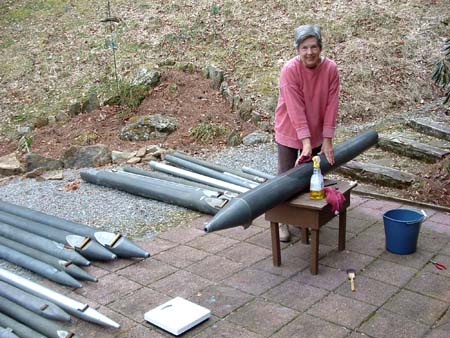 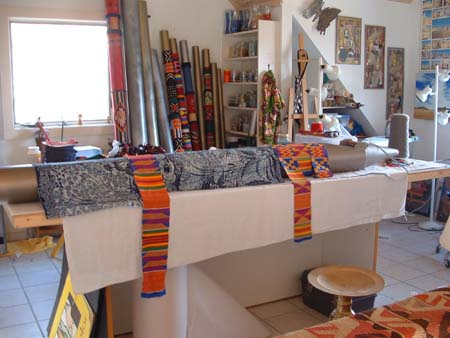 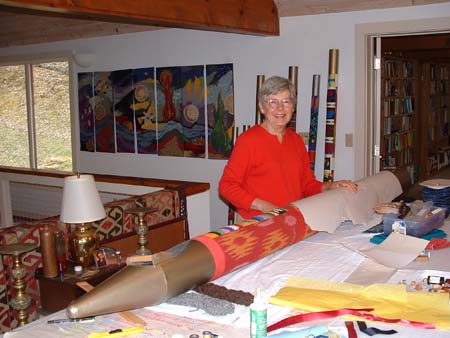 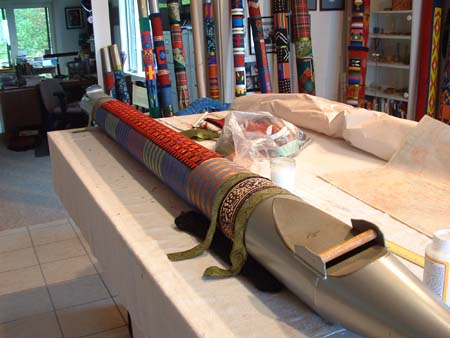 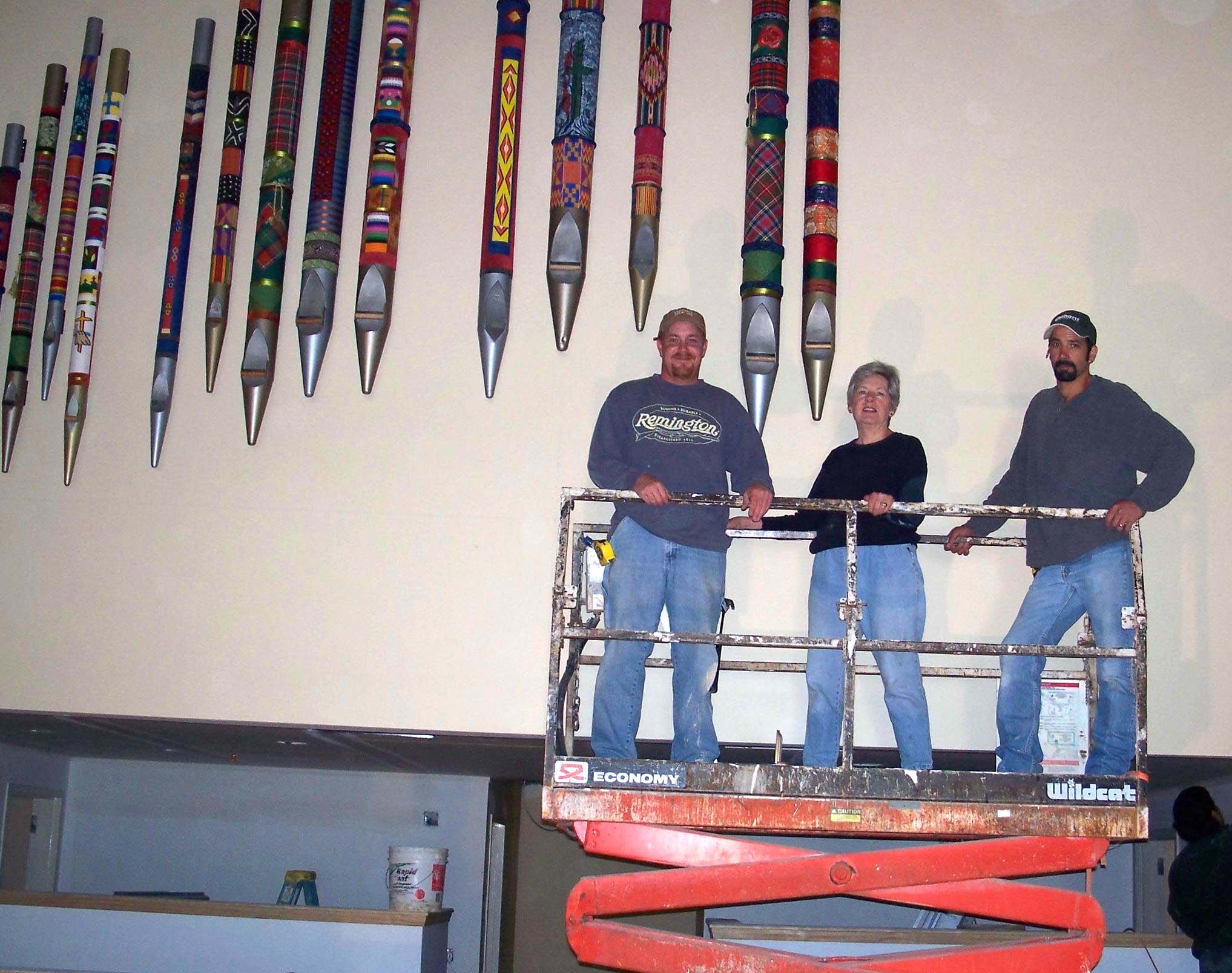 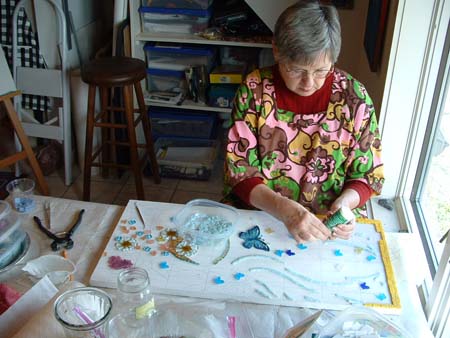 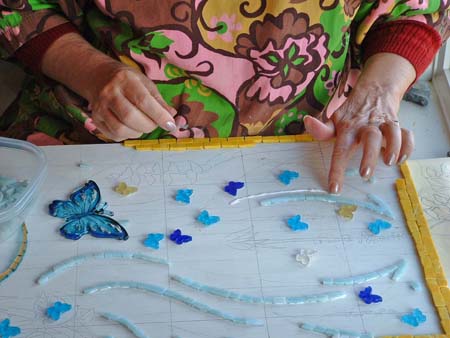 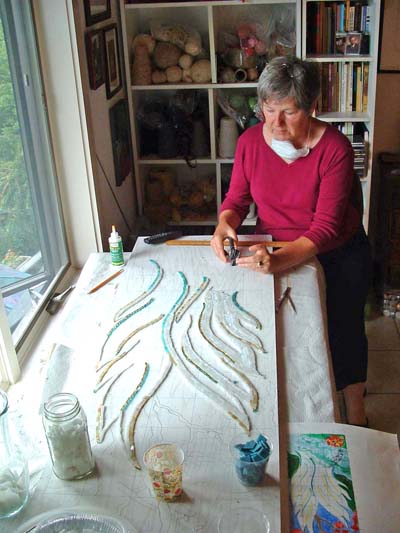 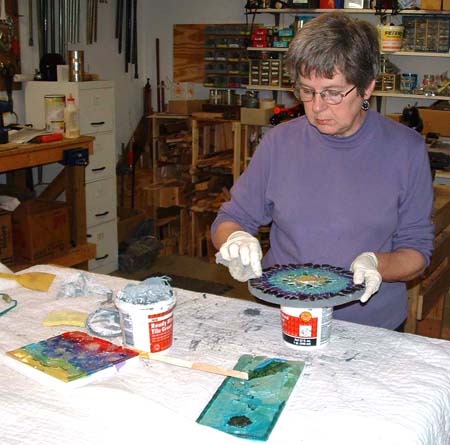 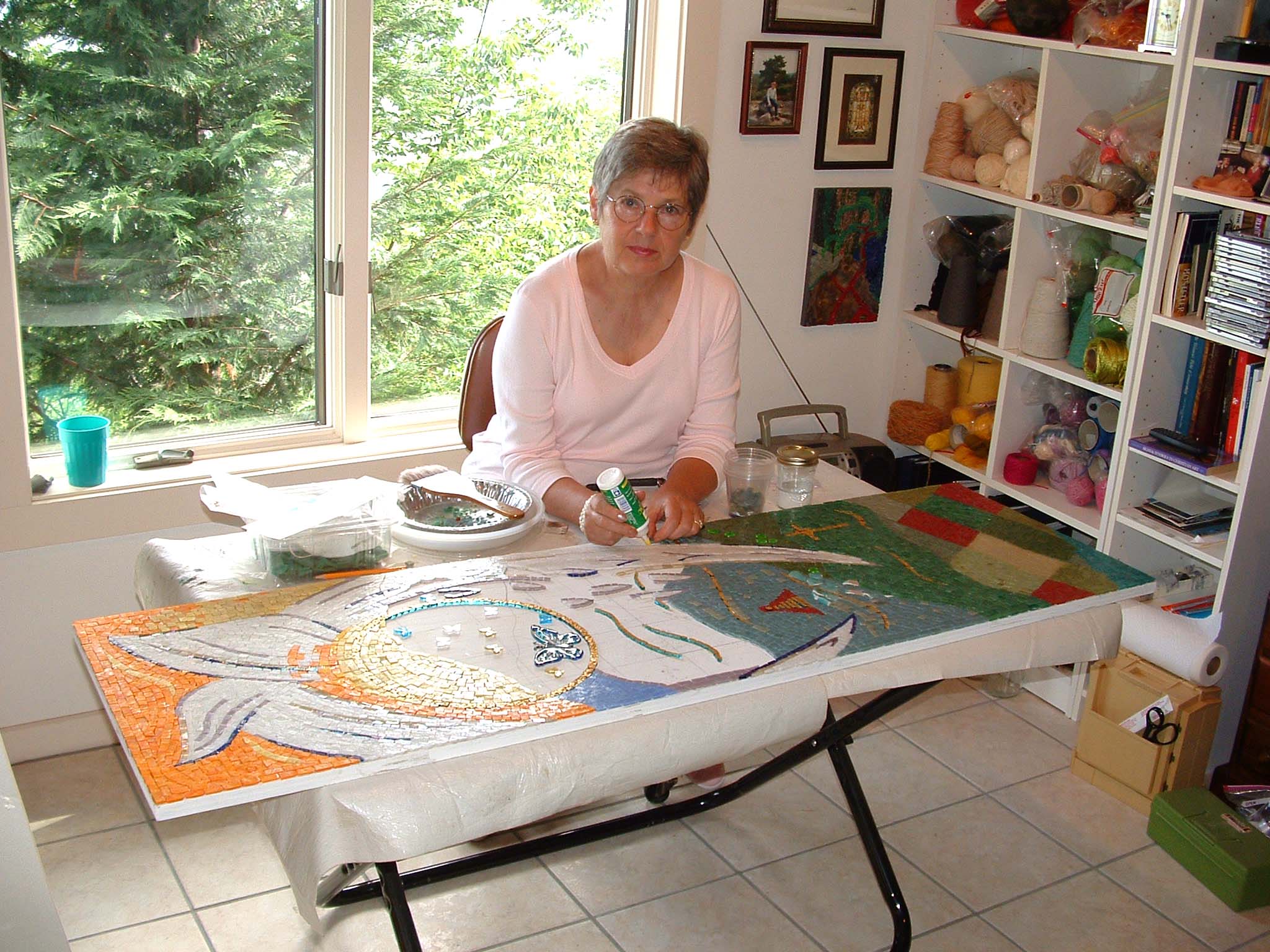 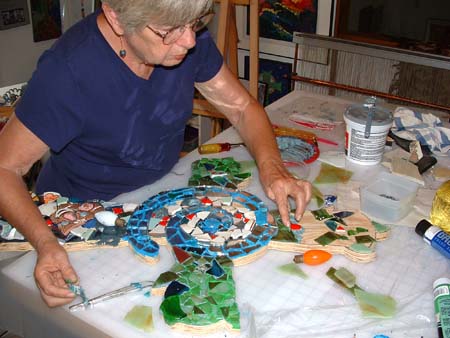 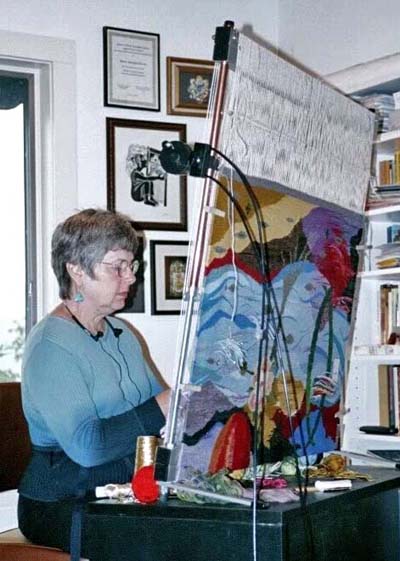 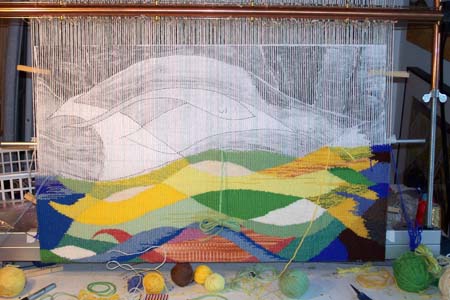 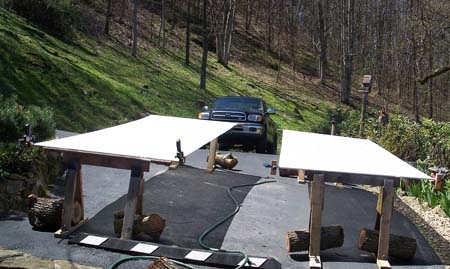 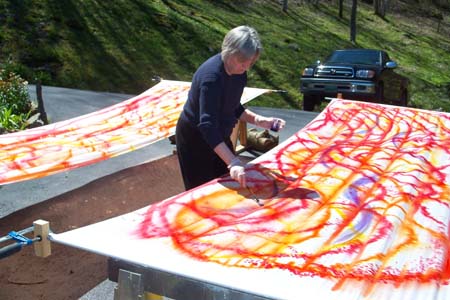 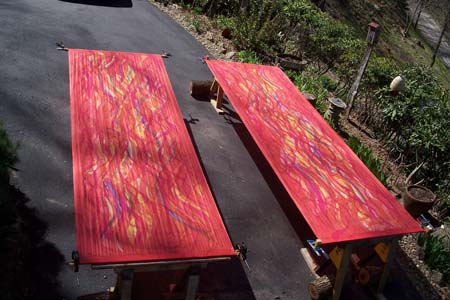 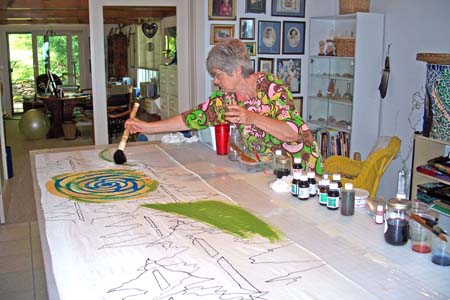 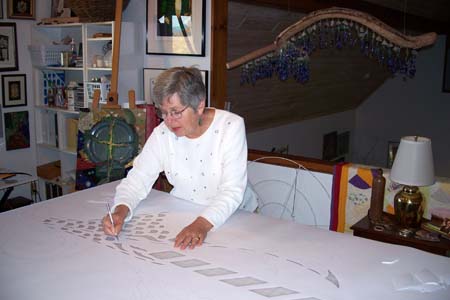 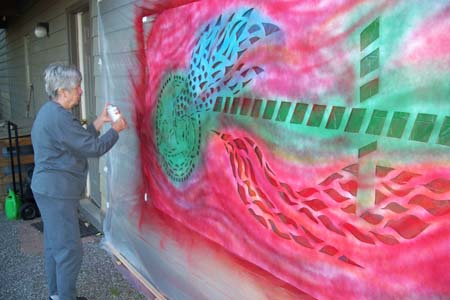