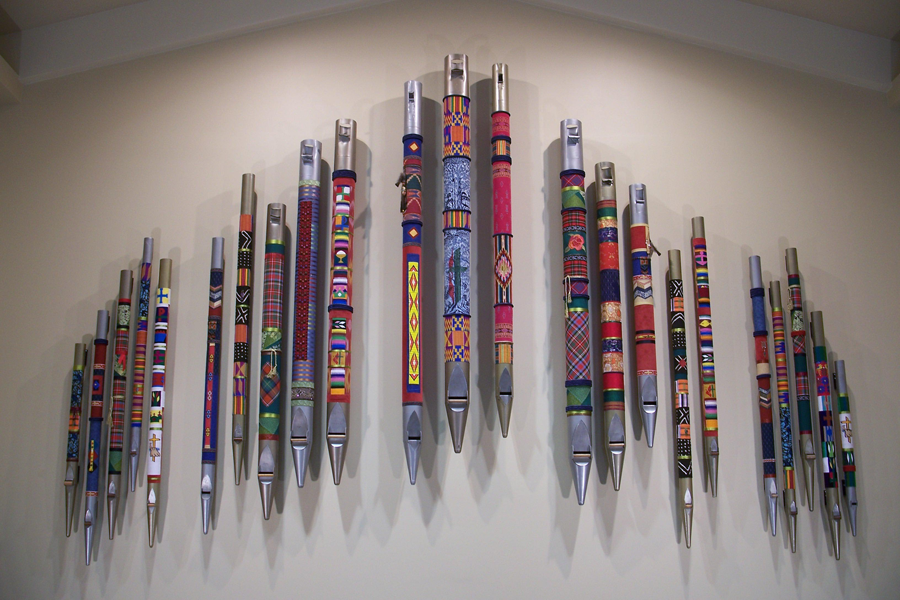 This artistic creation seeks to provide a welcoming presence to visitors from all over the world to Lake Junaluska Conference and Retreat Center and to Haywood County. This building, the Bethea Welcome Center, is named for Bishop Joseph and Mrs. Shirley Bethea. Bishop Bethea was the first African American Bishop in the Southeastern Jurisdiction of the United Methodist Church. The black cultural traditions in our churches emphasize musical arts more than visual arts. This work is a bridge between the two artistic expressions. It uses vintage organ pipes wrapped in a variety of ethnic fabrics as well as typical colors and patterns of those groups.

Each pipe is a story in itself. Many people have generously given their treasured textiles as well as the organ pipes themselves to help bring this artistic manifestation to reality. De-commissioned organ pipes came from all over the region. The original churches from which the pipes came are for the most part not known. An organ enthusiast, an organ repairer, and others contributed their “orphan” pipes. Two pipes came from a past restoration of the organ in Duke University Chapel. Except for cleaning and painting, the pipes are presented in the somewhat distressed condition in which they were received.

The pipes are dressed with kente cloth from Ghana, batik from Zaire, African mud cloth, an antique weaving from Mexico, Guatamalan stoles, authentic Japanese cottons, silk from a Korean wedding dress and many other interesting textiles. Among the handcrafted materials are a large piece of Cherokee beading as well as cross-stitching from the Palestinian West Bank, presented against “Damascus silk.” European settlers are represented by the official North and South Carolina tartan, Ancient Boyd and other tartans as well as patchwork. Details and photos of some of these textiles can be found in the Book of Thanks in the Welcome Center. 24’ x 10’   2007

Song of Justice and other art in the Welcome Center were underwritten by a generous gift by Bobby Ray Hicks in memory of his wife, Jill Rosenau Hicks. The rose on the pipe that is to the right of the center set is in honor of her family name.

May this work and this place bless all with

the orange of compassion

the blue of empathy

the green of peace

the gold and red of joy

and the white, yellow and black of inspiration. 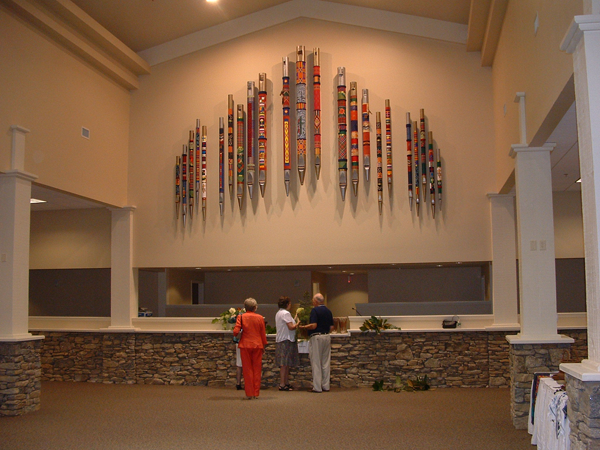