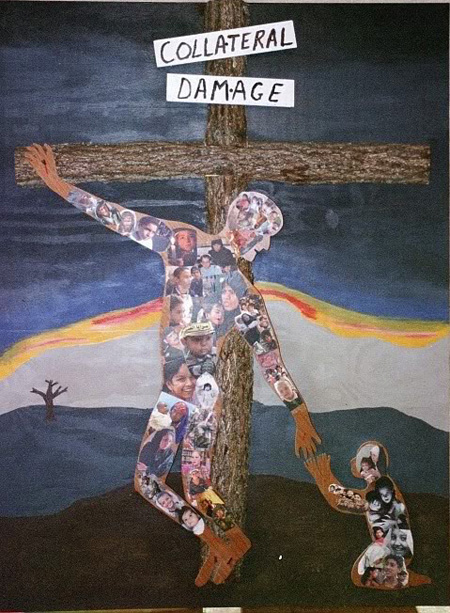 As the Bush Administration geared up to invade Iraq in early 2003, a number of us gathered every week at the Country Courthouse to protest the the drumbeats of war. Some of us protested all warfare. Others of us believed that the reasons for going to war were spurious, as indeed it later emerged they were. All of us were abhorred at the senseless carnage of war symbolized in the military phrase “collateral damage.”

As my contribution to the symbolism of this protest, I constructed a piece on plywood using a branch, a plywood cutout of the crucified Christ, and paints. Dirt is mixed into the paint at the foot of the cross. Pictures of people, especially children, from around the world are glued to the two figures. It can be mounted on a standard for display and has been used in a number of gatherings devoted to building peace in the face of our relentless predeliction to war.