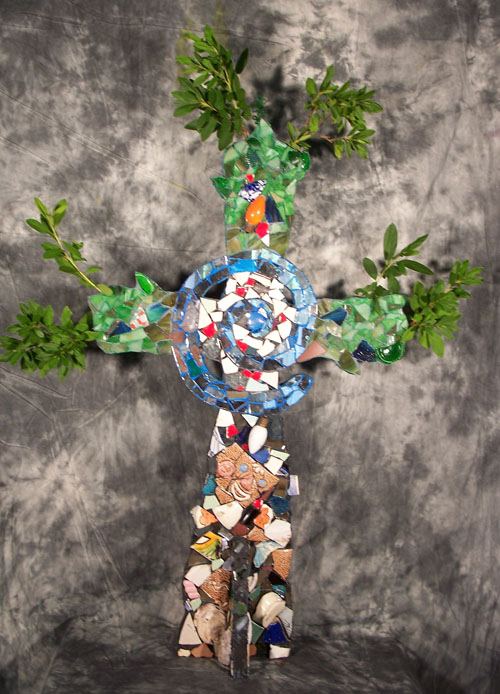 After the Storm (Katrina Cross)

This mosaic cross, free-standing about 4 feet tall, is mosaiced on both sides by broken glass, mirror, and pottery debris left behind by Hurricane Katrina. The pieces were collected by members of a church once served by a pastor who led a mission trip from our church to its coastal Mississippi location. A historically black Methodist retreat center, Gulfside, was completely wiped off the map. No trace was left.

The managers and supporters of Gulfside were determined to rebuild on the same or a nearby location. The Katrina Cross was intended to be placed in the chapel of a rebuilt center as a sign of survival and continuation even after devastation. A few pieces of broken stained glass from our church’s fire of 1994 were included to complete the arms of the cross. This piece is part of the green cross series.

It has been used widely for various regional and state conferences and meetings, including two General Conferences of the United Methodist Church in 2008 and 2012, in Texas and Florida. Its exact present location is unknown to me as well as the status of plans to rebuild Gulfside. 3’X4’ 2010

<<<BACK to Green Cross Series